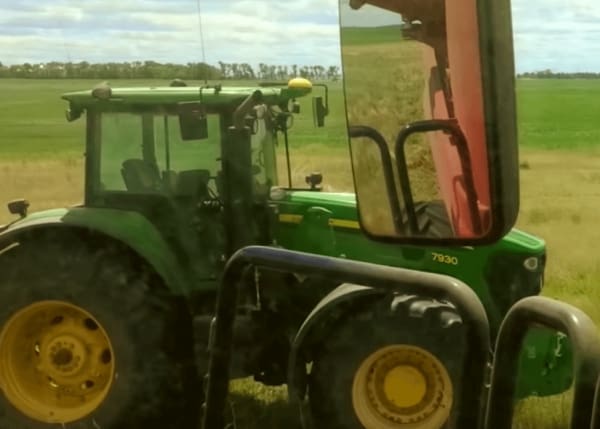 Advancements in farm technology often come from major investments in research and development by large companies, but there are still cases where farmer ingenuity is part of developing something new.

Matt Reimer, a young farmer from Killarney, Manitoba, has received plenty of attention after posting videos on YouTube last summer of his work automating a John Deere 7930 tractor to pull a grain cart during harvest. If farm shows have celebrities, Reimer was one at Ag Days in Brandon this week, winning the Ag Days Inventor’s Showcase.

“I hope that this is the start of something at the grassroots level, that farmers are more involved with their equipment and have a bigger input in it. I hope that’s the case, but if I’m a betting man, I’m probably not betting on that,” he says.

Several companies are starting to bring autonomous tractors to the market, but Reimer’s do-it-yourself approach is unique. As he explains, he installed auto-pilot controls from a UAV in the grain cart tractor and modified open source software to tell the tractor where to go based on the combine’s GPS coordinates.

Liability is the primary reason why companies have been slow to introduce driverless tractors despite having the technology, but the liability question doesn’t seem to faze Reimer, who is offering to install the automation package for other farms.

“I’m managing the risks. The tractor doesn’t go that fast and I’m not going to install it on just any farm,” he says, noting the only time the tractor leaves the combine operator’s sight is when it turns around after unloading. “As it gets better I’ll add more sensors and the safety will improve over time.”

“I think we’ll see more pieces of smaller equipment. We might drive one and have the other one follow us, or we might have three tractors doing the same thing and we’re sitting on top of a hill watching all three. It’s not going to take farmers off the farm. It’s just going to change the way we do things,” he says.

After one season, he estimates he saved $5,000 in wages for a grain cart driver. That individual was redeployed to harrowing and other work during harvest.

Reimer has POSTED THE SOFTWARE ONLINE for other interested (and tech-savvy) farmers to use.